Apartments for Rent: What will $1,495/mo get you in Prospect Heights? 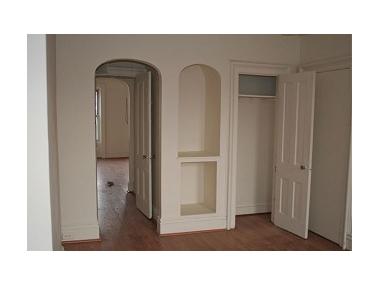 This “Prime” Crown Heights property, a little one-story shell across from Franklin Park, is for sale. They are asking $339,000 and soliciting cash offers. It seems like a very good price for the land alone.

“If the seller was properly motivated, and a little patient in terms of time to close (which they might be if they get no cash offers fast), a 203(k) loan on the property would turn up a very nice single-family home for the price of a condo,” the other day. An FHA-backed 203(k) loan, which would pays the seller and gives you cash for renovations, can be had by anybody who can pony up a 3.5% down payment. As long as you use the existing ~1000-square-foot foundation to erect a three- or four-story building, it could work.

If the plot is zoned R-6B, which it seems to be, somebody could erect a 4-story building (max buildable: 5200 square feet), one condo per floor, and if it’s short enough, no elevator would be required under the building code. Such a plan could be realistic – judging from a few small “infill” buildings recently built in the neighborhood.

With 5200 square feet to use, four stories would clock in at 1300 per floor, with a nice roof deck and back yard to boot. By going condo, you could get money back quickly even at $570,000 per floor. So why is this still on the market? One issue could be that no one is giving out construction loans right now (hence the cash-only situation, and the interest in 203k loans).

Design Ideas to Brighten Up Your Brownstone

Posted on December 29, 2011 by MattBrooklyn
2 Comments 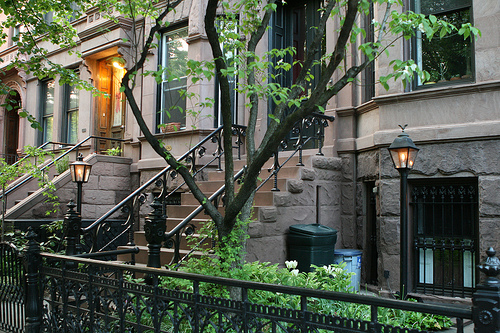 When you think of Brooklyn living, you think of brownstone apartments. The brownstone offers vintage charm with high ceilings, decorative molding and pocket doors. Unfortunately, brownstones can also be dark with awkward bathroom and walking spaces. To keep your brownstone from feeling like a dungeon, there are some simple tips to help you decorate your space and brighten things up.

Let there be light! Depending on the angle of your Brownstone (or if you have a corner lot) it can be a bit difficult to brighten up your living space with just natural light. This makes it very important to have adequate lighting in each room. You may consider installing overhead light fixtures and investing in floor lamps. The type of light bulb you use is also important. Full spectrum light bulbs emit natural looking light which can help augment the lack of sun light in your brownstone. Paint your walls a light color to help reflect sunlight into open spaces. A white shade is the best way to accomplish this goal.

Color your life. Adding bright colors with accent pieces really make a room pop. Consider red decorative pillows or a throw on your neutral colored furniture couch. You can also be creative with your lamp shades and chairs. Another great way to add a little spark to your space is to paint one of your walls a bright color. Try a bright yellow as an accent wall. This will make a room pop as well as help reflect light and brighten up the space.

Furniture types. This is always a touchy subject because it is all about personal preference and budget. Your best bet is to invest in furniture that is more modern than Victorian. Modern furniture is more adaptable and most of the time uses brighter colors and less space that their Victorian counterparts. While modern furniture can range from incredibly expensive to downright affordable, choosing the right pieces that will last should be your number one goal. Now that you have invested in your space, you should make sure your brownstone is secure in order to protect you new investment

Security with style. Since Brooklyn brownstones were built many years ago, most do not have sufficient security. Your first step is to install deadbolt locks on your doors and an alarm system. Second, you need to use them! If you live on the first floor make sure your window bars are secure. If you do not have window bars, you should consider installing them. They are not the most attractive design feature, some may argue they are ugly, but they do deter burglars. Brooklyn brownstone tenants should also consider NYC rental insurance. Protecting your possessions, especially your new decorations, is a great way to ensure you stay financially whole in the event of a theft or fire. You can insure all of your possession for around $20 a month with rental insurance.

Now that you are armed with how to brighten up your dreary brownstone, start hunting for inspiration. Find others who have transformed their brownstone from dark and dreary to bright and inviting. Be the do-it-yourselfer you always knew you could be!

Get ready to bid on this Crown Heights landmark, located at 838 Prospect Place (photo: Daily News):

It’s scheduled to be up for auction on Oct. 20, starting st $500,000. But before you get too excited, consider that the building has been empty and rotting since about 2008, so you’ll likely need to do a full gut renovation while you fend off the raccoons infesting the back yard. Apparently the city purchased it and planned to make it an assisted-living facility group home, but they had trouble reconciling some design requirements (such as new fire escapes) with historic preservation codes covering the property. 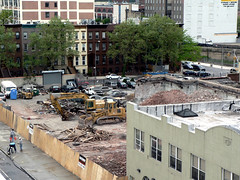 Uploaded by horseycraze in the Prospect Heights Photo Pool:

“the lot of the former vanderbilt products building. to be replaced by a condominium.”

“Get those lenses out: we can be the preservationists of the memories of what this neighborhood was pre-Ratner.

MikeWalton718 reports in the Prospect Heights Message Boards: “The ‘Park Slope Garage’ on Sterling Place btw Washington and Classon is being rennovated, or more likely torn down to make way for brand new condos…”

“I know what you all are thinking: ‘Park Slope Garage’? Isn’t that in Crown Heights? The answer would be yes, but on the other hand, they’ve been abandoned for like 8ish years, I hear and they were infested with rats. I think it’ll be neato. I hope anyway.”

My Name is Michael

Posted on February 2, 2006 by dailyheights
10 Comments 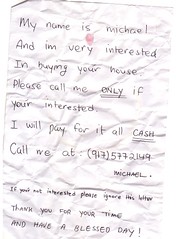 My Name is Michael

“Came home to find this letter taped to my door a while back. I’d put in up in the message boards but I haven’t figured out Flickr and besides, there’s really nothing at all to discuss. It’s all here. Totally amazing.”

How to Get Past the Co-op Board

Posted on January 26, 2006 by dailyheights
No Comments 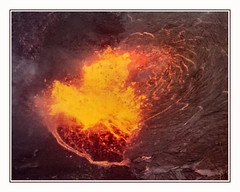 BrooklynSwordStyle says: “Man, this whole nabe has gentrified all to hell. I remember when it was a just cooled mass of magma and noxious gasses. Those days rocked. Only the hard-core lived here, and the vibe was great.”

“Old school? Fuck that, man. We were single celled! I had this kick-ass bit of rock, but then these yuppie lung-fish started waddling in on their fancy-pants fin-legs and drove up the cost of everything. I tried dividing myself a few times to share the rent, but then one of me mutated and became a total dick to be around. It’s all those damned lung-fishes’ fault. If they hadn’t moved in, then those hairy-assed mammals wouldn’t have shown up. Now this place is so lame.”

*OK, OK, we know a million dollars ain’t what it used to be… So let’s propose a new definition of Millionaire: anyone who won’t think twice about plunking down a record-breaking (for Brooklyn, at least) $1000+ per square foot for a condo.

…That’s the sale price predicted a few months ago for units in Richard Meier’s “super deluxe” 15-story glass tower on Grand Army Plaza in Prospect Heights, now under construction (photo, right). While these may be quite a bit more expensive than luxury apartments near the edge of NYC they seem like a screaming bargain next to the current price of luxury apartments in Manhattan, which according to the Daily News are now almost $1500 per square foot. 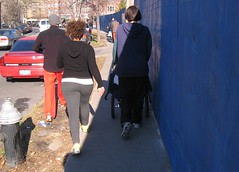 But there’s a bigger story here about a smaller public space… at least for those of us Prospect Heights residents who are already making way for millionaires every day as we try to squeeze past the blue plywood wall that’s blocking the public sidewalk.

The construction company drilled the foundations for this wall more than a foot into the cement sidewalk!

Is that legal? No idea – we are simply too dense to translate those obtuse building permits.

Is it annoying? Just ask any pedestrian who’s forced off the sidewalk and onto the muddy, garbage-strewn strip of “grass” by oncoming strollers, dog-walkers, or the weekend hordes of PHers making their way to Prospect Park and the GAP Greenmarket. Hell, try to get past a single XXL pedestrian, for that matter – the sidewalk simply no longer adequately allows two-way traffic.

Is this what life will be like for the next two years? When the subject came up on the Prospect Heights Parents group on Yahoo!, there was some talk that local politicians (Tish? Marty? Hello?) could pressure the developer to move back the wall.

Somebody got in touch with somebody who actually knows something at the DOT, and according to them, the permit says they have to maintain a pedestrian walkway 5 feet wide. Uh… what pedestrian walkway? We don’t see any. Anybody handing out citations yet?

No. In fact, somebody called 311, and they said, “Get over it, crybabies!” Well, not exactly… but apparently they claimed it had been inspected and that the passage is adequate. Uh… no.

What next? You can make noise, too: If this annoys you, then call DOT and reference complaint # C1-1-203530336. Now who’s got their phone number? Let us know in the Prospect Heights Message Boards.

—
Construction photo: Thanks to Atomische for capturing this and uploading it to the Prospect Heights Photo Pool.