BLOOD ON THE TRACKS

From the Prospect Heights Message Board

ftunnah writes: “Does anyone know what happened at the Grand Army Plaza Stop today? There were about 6 cops there around 1pm this afternoon and there was a lot of blood on the platform. I can’t find it on any local news websites….”

Posted in the Prospect Heights Message Board

Use Drums, Not Drugs

Posted on September 23, 2005 by dailyheights
Comments off

OK, OK, it was an innocent typo…

Posted on September 22, 2005 by dailyheights
Comments off 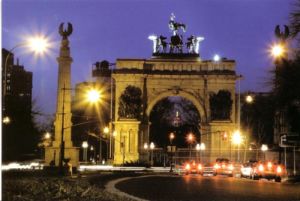 According to Wikipedia, the autumnal equinox is “the moment when the sun reaches one of two intersections between the ecliptic and the celestial equator … the length of the day (and the night) is precisely 12 hours at an equinox.”

Posted on July 31, 2005 by dailyheights
Comments off 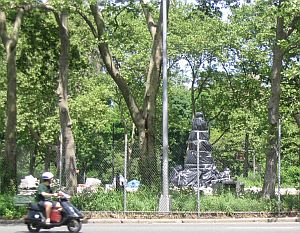 So now that summer is almost over, what’s the deal with the fountain at Grand Army Plaza (Bailey Fountain) that stilll hasn’t been turned on? queen_of_pies reports on the Prospect Heights message board… “Here’s what Prospect Park Commissioner Tupper Thomas wrote to me when I inquired about why it was dry: ‘We hope to have the fountain running by Labor Day, but it could be as late as Sept. 15th. The engineering sub-consultant has taken responsibility for the problem and the new pump has been ordered. Installation will begin as soon as the new mechanical device arrives…'”

JoshB's Article on the New York Puppet Library, in TIME OUT, Now

Posted on May 20, 2005 by dailyheights
No Comments

DH regular JoshB writes: “Not to toot my own horn, but I have an article in this week’s Time Out about the puppet library. Go … service journalism!”

You can try looking at the Time Out website, but they have an annoying habit of not posting articles online.

PICTURED: The home of the New York Puppet Library in Brooklyn. What would puppets read (WWPR)? You can find out. This just in from the The Puppeteers’ Cooperative:

“The Rights of Spring in Brooklyn, NY will happen, starting with a volunteer parade, 1PM Saturday May 14th and Sunday May 15th … Saturday starting at the Arch (Grand Army Plaza), and Sunday starting at the Meadowport Arch, just inside the park at the Grand Army Plaza. Come parade and be in the show – you can watch it too, if you wish. This weekend will also be the kickoff of the New York Puppet Library lending season. Then we will attempt to have a show in, at, or near the Arch every Saturday at 1PM, and have the library open 1-4 PM.”

DH contributor Quig got his hands on an artist’s rendition of Meier’s proposed luxury condo tower on Grand Army Plaza. Is it authentic? Based on the description we published last week (“glass, white, curved to fit the street shape”) we can’t rule it out as a fake.

Guess What? Temple Tower Could Be 30 Stories After All

(NOTE: All of the ‘air rights’ business below could be out of date. Still searching for updates but have not found any.)

Interesting. You know that tall luxury condo that will be built on the Union Temple parking lot facing Grand Army Plaza? Now, a member of the Prospect Heights Parents List (Yahoo! Groups) say the developer is in trying to buying air rights from a few neighboring buildings. Successfully buying air rights would permit him build up to 30 stories. The plan would have to survive community approval and review, of course, but it could be done.

So… the New York Times article may be “incorrect” for now, but that “30 stories” figure came from somewhere.

ALSO:We found out that the Eastern Parkway block association has discussed the condo development with Council Person Letitia James. Summary:

-Glass, white, curved to fit the street shape
-Eastern Athletic’s pool will lose (some of?) its grand view! (but will still receive light)
-Meier building will be 150 feet, or slightly higher than Union Temple)

Posted on April 12, 2005 by dailyheights
No Comments

[UPDATED]
Will the Union Temple Condo be 16-18 stories? 30 stories? 15? Both Curbed and Brownstoner picked up on Quig’s coffee-spitting moment yesterday when a New York Times reporter blithely alluded to a (ho, hum) 30-story condo to be developed on the Union Temple’s parking lot on Grand Army Plaza. Reliable sources had led us to believe that the project was going to be only 16-18 stories.

Is it possible the NYT simply got it wrong? If so, it will be another great excuse to haughtily smirk and wryly refer to that paper, with a nudge-and-a-wink, as “The Gray Lady”–which, if you’re an editorialist at a competing paper, is shorthand for “I’m intensely jealous that THEY get all the readers and that they rejected all my freelance queries.”

Now, our favorite ProHo reporter DEBORAH KOLBEN–who is always right there on the stories we care about (and who has never publicly referred to the Times in a pejorative, ageist manner), has done her own piece on the Temple Tower, which pegs its height at a more reasonable 15 stories.

Catering to the Rich: Did we call it? We called it. Developers originally and laughably sold this condo project to us as “not luxury.” However, Deb’s conversation yesterday with a “boasting” spokesperson for Richard Meier revealed that “It will be the most luxurious building in Brooklyn.” Local agents speculate a 2-bedroom unit will go for about $1 million.

So what’s the real story? 15 stories? 30? The real story is that a developer has been planning for years to put a very large, very exclusive condo in your neighborhood, and you probably didn’t find out about it until very recently.

[UPDATE TO UPDATE] Thank you, dear guest: “The NYTimes has confirmed that (the condo) is NOT in fact 30 stories. They were working from old info and will run a correction shortly. The building will be 150 feet tall, and roughly 16-18 stories.”

Say Goodbye to Sunlight? Plaza Condo May Loom at 30 Stories

From the “Affordable Housing for The People” dept.:
That Grand Army Plaza condo development tentatively known as 1 Prospect Park: exactly how massive will it be? Nearly double the size we thought? Assiduous reader Quig writes in: “From today’s NYT. I almost spit coffee on my laptop.”

Today’s NYT: “Mr. Meier has taken a similar hands-on approach to a residential building he is designing in Brooklyn on Grand Army Plaza overlooking Prospect Park. The 30-story condominium includes 120 units, most of which have balconies with park views.”

Huh. There was some “discussion” of this at a community meeting about a year ago, and a few people were fuming about the long shadow this would cast–not to mention the problems a ginormous condo complex could inflict on St. John’s Place (i.e. sanitation issues and traffic from an underground garage).

The funny thing is, until today, we were under the impression that the condo would be only 16-18 stories in height. From The Real Deal, just a few months ago(Sept.-Oct. 2004): Architect Richard Meier, who designed the celebrity magnet towers at 173-176 Perry Street, is working on a new project in Prospect Heights. The building, on Eastern Parkway, is for developer Mario Procida of Seventeen Development LLC and should be ready in two years. It will be 16 to 18 stories tall, and feature one-, two- and three-bedroom units, but will “not be luxury,” Meier told New York magazine.

By the way, “Not Luxury” will be defined as affordable to the top 1% of Brooklyn families, as opposed to the usual cut-off of 0.5%. It’s a development for The People! (CAUTION: This is humor.)

According to Property Shark, the lot is still owned by the Union Temple; the lot is currently being used for parking. We are in touch with sources close to Union Temple, so stay tuned for updates.