STRATEGY TIP: How to Meet Halle Berry on Bergen St. 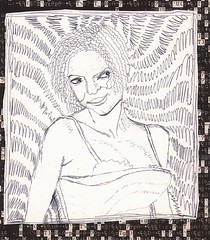 cvc reports on the Prospect Heights Message Board:”Halle Berry movie to be filmed on Bergen Street, at least according to the ‘No Parking’ tell-tale pink movie flyer. The movie is called ‘Perfect Stranger.’ Cars have to be moved on Monday night at 9.”

metulj asks: “Is it a ‘Move your car or it will get moved to the nearest safe, legal spot’ deal?”

“… I got $200 out of a movie production crew in Knoxville, TN (Box of Moonlight) once because they wanted me to move my car from in front of my house. They said they had permission to tow all cars yada yada. I told them that if I saw a tow truck backing up to my car I would start punching tickets.”

“I was asked how much it would take to get me to move the car on my own. I figured 2 C-notes would cover it. Got to eat lunch with John Turturro too.”

“Now there’s a strategy to meet Halle Berry (unless you are a hater). Box of Moonlight is an excellent flick, IMHO.”

More Good Advices in the Prospect Heights Message Board

Is Richard Dreyfuss a Jerk? Playful? A Playful Jerk?

Posted on November 23, 2005 by dailyheights
No Comments 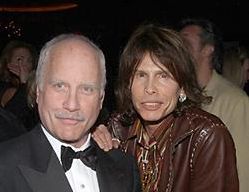 devincf, a semi-occasional-regular-of-late on the Daily Heights Message Boards, reports on his difficult interview with Richard Dreyfuss on the set of Poseidon, a remake of The Poseidon Adventure. The interview ends with Dreyfuss punching him (playfully? hard?) in the chest:

Devin: So I understand that you retired from films in 2004. What brought you back?

Devin: OK. But what was it about Poseidon in particular that really got your interest?

Dreyfuss: The money they offered.

Devin: About two weeks ago they did a screening of Close Encounters out at Devil’s Tower.

Dreyfuss: That would be cool.

Devin: Do you ever revisit your films from the 70s?

devincf narrates: “Dreyfuss builds up to the punch. He gets an iced coffee, and after taking a sip he throws some of the ice at me. He immediately follows that up by splashing the coffee itself in my face.“

Devin: That was pretty tasty.

Dreyfuss: It’s taken them sixty something days to get it right.

Dreyfuss takes a small “This is for CHUD, right? This is CHUD. It’s not like for the Nobel Prize.

Tiffany, defincf’s official Warner Bros. liaison, attempts to spin it: “You’ll make sure people know he was being funny?” she asks.

Read the rest of this painful exchange and devincf’s attempt to turn it into an article at Chud.com.

Don't Worry, You Can Still Get it at Blockbuster

Posted on October 28, 2005 by dailyheights
Comments off

You Guys Made "The Times" Again

Posted on October 16, 2005 by dailyheights
Comments off

Thanks to Paul Berger for name-checking Daily Heights in his New York Times article about the renegade anagram bandit who’s been messing with the marquee of the long-closed Flatbush Pavilion movie theater:

“David Collins, a tall, thin, 43-year-old father of two, was tired of seeing the marquee of the Flatbush Pavilion display the same film titles since it closed in May 2004. There’s only so much staring at “Van Helsing” and “Man on Fire” that a man can stand, especially when the titles appear on both sides of the marquee. So one night last month Mr. Collins, an investor relations consultant, lugged out his stepladder and took matters into his own hands. He climbed up and rearranged most of the letters to spell ‘Hanna Have Snail Venom For Ginseng Firm.'”

It would have been simple for Paul to point out that Sarah broke the story of the “sign enhancement” right here on Dailyheights.com … but even better, Paul gave a shout out to the chatter in the Prospect Heights Message Boards:

“Indeed, the message boards at the Web log Dailyheights.com have been full of suggestions for alternative films and even rumors that the graffiti is part of a guerrilla marketing campaign. Last week, someone complained that Van Helsing should be returned, and Mr. Collins’s reply was swift. Within a couple of days, he turned the M upside down to form ‘Van Helsings AWOL in Iran.'”

Finally, this line is great:

“I thought if I changed it, it might make people think a bit more about their surroundings.”

Posted on September 28, 2005 by dailyheights
Comments off

Sarah from the Slope sent in this shot of the which has been “improved” by local movie buffs: “This was sent to me from my husband’s cell phone, and I’m forwarding it to you because I love your site (even though I actually live in the North Slope). I guess some artist-poets-vandals finally got tired of wondering when “Man on Fire” and “Van Helsing” would actually close… though I think the poet-vandals must have added some letters of their own, right? Or am I mis-remembering the movies that were on there before?”

Posted on September 27, 2005 by dailyheights
Comments off

trevorbrklyn writes: “Rosie Perez showed up and out at a screening of Do The Right Thing @ The Brooklyn Academy of Music. She kept it very real with the audience answering questions for an hour. I was very impressed with how gracious, articulate and intelligent she was. She humbly stood outside of BAM and answered everyone’s question and signed autographs for everyone, and was the last one to leave I was amazed by that graciousness.”

Posted on August 20, 2005 by dailyheights
Comments off

Via turbanhead.com. …was Angelina there too? 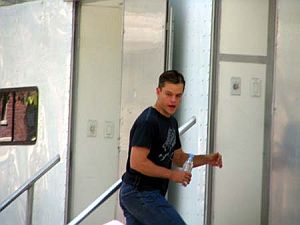 MOVIES: "Crash" and Racism in the City

Posted on August 2, 2005 by dailyheights
Comments off 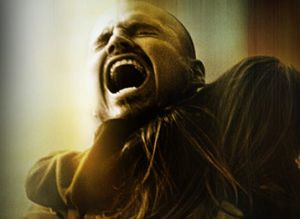 “Crash” [Trailers]: Saw this at the AMC on Times Square. I went in very skeptical, but this film is totally engrossing. I don’t want to give anything away, but the film is more about challenging expectations, rather than being preachy about race relations. I wouldn’t say it’s “required viewing,” but it was a great feeling to walk out of the theater and feel like you didn’t just waste the last 2 hours of your life. In fact, we spent about an hour afterwards just talking about the issues it raised.

There were some cringe-worthy moments – some extremely artificial melodrama, and this whole recent trend of injecting “smart and witty” dialogue into scenes that don’t need it, not to mention the inclusion of Sandra Bullock, whose acting style may be even more wooden and forced than Julia Roberts. However, there were some amazing plot twists, and a scene where Ludacris, playing a carjacker, goes on an anti-rap tirade (could have been funnier if he played it better).

We actually skipped “The Aristocrats” to go see this. Reading the Village Voice review pretty much steered me away from it… I was already afraid the film had a bit of a weak premise. However, now I’m intrigued again, after reading Douglas’s review of it: “it was possibly the most shocking and revolting exposition i have witnessed in any medium in recent memory. in other words, near-euphoria. oh, and it’s a relief to discover that i can still be shocked.”

Read Comments on “Crash” and Racism in the City

UPDATE, Saturday, June 11, 2005, 1:15:50 PM: John Turturro, walking past the corner of President St. and Prospect Park West, gave a passerby directions to Ocean Parkway. He then proceeded in a northeasterly direction, toward Union St., where he waited briefly at the crosswalk, then crossed over to Grand Army Plaza.

STATUS REPORT: It has been nearly 1 year and 9 months since our last John Turturro update. As reported Thursday, October 23, 2003 at 03:51 PM, Turturro was spotted striding purposefully past the Blockbuster near Flatbush and 8th Aves., wearing a dangly earbud and engaging in an intense cell phone call. As he strode past, Turturro pinched the microphone component between his left thumb and index finger, drawing it closer to his mouth in an attempt to improve the call quality.

Heights Coffee, the new coffee house at 335 Flatbush Avenue (between Park Place and Seventh Avenue, next to Geido) is having an Open House tomorrow (June 16th) from 6-9 pm. The place is owned and operated by realtor Tony Atterbury of Slope Heights Realty. The storefront, pictured, is the same one formerly occupied by Slope Heights Realty, which has moved a few doors down the street.