Posted on May 10, 2005 by dailyheights
No Comments 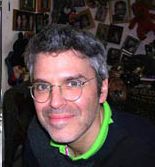 Linda Yablonsky writes: “…on Saturday afternoon … I dropped into Parker’s Box, in Williamsburg, for what the invitation had billed as a weekend ‘international art market’ … On their wall, Prospect Heights housemates Oliver Herring (Max Protetch) and Peter Krashes (Derek Eller) had photo-documented their careers and were mapping connections between them, many they had only just discovered.” 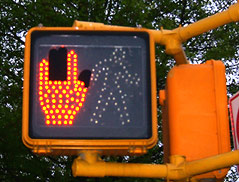 sje writes: I found yesterday afternoon that the corner of Vanderbilt and Bergen (in front of Daffodil Hardware) has been Rock & Stopped! This is done by an artistic duo who go by the moniker “Thundercut” (http://www.thundercut.com), and who are also ProHo residents, albiet secretive ones. They leave public artworks in many places, there’s a few beautiful cutout wooden seahorses and bubbles a bit further up on Bergen.”

“Rock & Stop” is cool, but wouldn’t “Stop & Rock” be even cooler? I guess you can interpret it any way you want.

'Lambkins' out on Amazon

Posted on May 6, 2005 by dailyheights
No Comments

This is graphic artist and P.H. resident Jon Keegan‘s first book cover. It’s for “The Lambkins” by Eve Bunting and you can pre-order it now: “Good for young teens, shrinking children and crazy old ladies with dollhouses,” Jon says.

Maybe one of our Newswalk resident readers can arrange a guided tour for us? 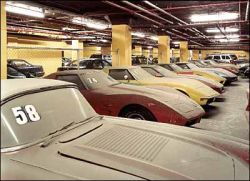 JOSH DEAN writes in New York Magazine: “There are 36 vintage Corvettes in the garage below the former Daily News printing plant in Prospect Heights, Brooklyn. They’re dusty, and secure behind a chain-link fence, as if being held as evidence: one Corvette for each year they were made, starting with a pearl-white ’53 convertible and ending with a red 1989 model. Some of their windows are open. Some have flat tires. A lone white ’61 rests outside the fence. On its back end, someone has scrawled NO ONE LOVES THESE VETTES! in the grime.”

Thanks to Captain Marvelous for the tip!

Posted on May 2, 2005 by dailyheights
No Comments

“The Impact Theatre is tucked between a Chinese restaurant and a corner store on a quiet avenue in Prospect Heights, Brooklyn. Once you’ve squeezed through the ‘foyer,’ you find yourself in a tiny room filled with tattered blue seats and a creaky stage. For the next few weeks, this charmingly shabby space will serve as the kingdom of ‘Polly Princess and the Penniless Fry Cook,’ a fresh take on fairy-tale royalty as portrayed in children’s theater.”

Poem Inspired by Umbrella Salesman Outside of the Q Train Station on Flatbush Ave.

Posted on April 25, 2005 by dailyheights
No Comments

“Another subversive love poem was sparked by Mr. Mehigan’s observation of an umbrella salesman outside a Q train station in Prospect Heights, Brooklyn.”

“Steadfastly, though the rush-hour crowd star thinning,
he stares into this morning so like evening
because he seeks the one he knows will come
one always just about to turn the corner,
blushing, and misty-faced, and misty-haired
skirting the storefronts, beautifully bereft,
who has left home this morning unprepared.” (Full Poem…)

“Until he gave up alcohol in 1999, Mr. Mehigan spent much of his time in what he called a “fog of drinking,” sometimes waking up with blisters on his chest after falling drunkenly asleep at night while smoking. It was the drinking that helped get him fired from the press.”

“‘I was already wasted and had gotten in a fight with a friend about Walt Whitman,’ he said, recalling the night in question. ‘Then I went upstairs and immediately got in a fight with my girlfriend.’ After taking the subway to Chelsea and consuming a 40-ounce bottle of Budweiser and several Bud tall boys, Mr. Mehigan let himself into the empty offices of the publisher at 3:30 a.m. and passed out at his desk while hunting for nocturnal entertainment on the Internet.”
Links:
The Poetry of Joshua Meshigan [New York Times]
Finding the Verse in Adversity [New York Times via Ohio University Press] 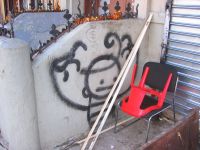 UPDATE: In case you were wondering who draws all those little guys everywhere … ideashak has id’d the spraypaint artist as SOLER.

Posted on March 9, 2005 by dailyheights
No Comments

How cool would it be to have something like the Dumbo Art Under the Bridge multi-day festival right here in Prospect Heights? Well, it just may happen, and this weekend, you can help plan it. Atim writes: “I am setting the first Prospect Heights Arts Festival planning meeting for Saturday March 12 at 4pm at Heart of Brooklyn, A Cultural Partnership, 789 Washington Avenue, Brooklyn, NY 11238; 718-638-7700.

The goals of the first meeting are to present and discuss the concept (a 2-day Fall festival designed to identify ProHo as a vibrant center for artists, including filmakers and musicians)
2. Understand what it takes to do it (via the example of Dumbo Arts Festival)
3. Planning and funding issues
4. Support by Commmunity Board 8, Brooklyn Chamber of Commerce, Borough President, Council Members and State Senator
5. Non-profit or not?

Posted on March 3, 2005 by dailyheights
No Comments

In BETWEEN WORLDS, Tracy Phillips "presents
a series of paintings that straddle the lines between youth & age,
abstract & figurative, dark & light, and comic & tragic.
They are ambiguous, simultaneously frightening and alluring. One might
wonder, are these depictions of today’s youth projected into some
unknown future, or a representation of an inner psychological state?
… The figures emerge from an
intuitive process, drawing on memory and imagination."