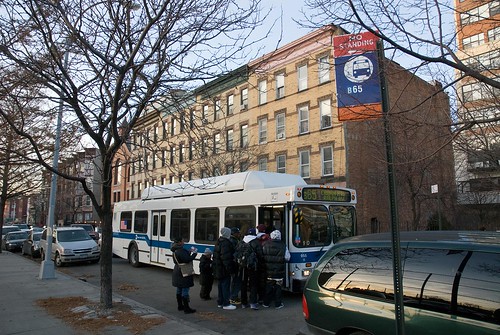 Recommended in Crown Heights: Get a 5 a.m. Haircut at the Experience Unisex Salon

Via NY Daily News: “Brooklyn barbers work the hardest. Khalil Wright cuts hair till 1 am at The Experience Unisex Salon on Franklin Ave. in Crown Heights. Wright’s midnight styles go for about $20. If the shop is very busy, Wright stays till 5am.”

This place is quite a social hub, judging from their myspace page (yes, those still exist). Check out the multi photo albums:

So it’s not as crazy as Soho, where prices per square foot are nearly triple ($6.23 vs $2.01 in Crown Heights). But Crown Heights just had an 18% jump in square foot prices during the last quarter. That rent rocket is on par with what we’re seeing right now in the most sought-after Manhattan neighborhoods, as the RentJuice graphic shows (above).

This comes from a report by RentJuice that provides an exhaustive amount of info on NYC rentals, organized by neighborhood. Are you are paying more than average to live in CH? Check out page 12 of the report and find out: http://static.rentjuice.com/rj_index/NYCIndex-4Q2011.pdf

Source: Curbed. Thanks to whynot31 for the tip.

How to Get Work Done in Prospect Heights: the Best Quiet Cafes, Spaces, and Places

If you’re looking for a decent cafe, space, or place to work in Prospect Heights away from your tiny kitchen table, you need to venture outside. But perhaps the biggest problem is avoiding loud music, baby/toddler, bustling lines of customers, and other distractions.

One of your first stops should be the Central branch of the Brooklyn Public Library, which is open late and has wifi. Some find the main branch library at Grand Army Plaza to be too noisy; if that’s you, check out these other Brooklyn Library locations. The smaller neighborhood branches tend to be 1-2 rooms, but are pretty quiet as long as you aren’t there during “story time.” Try the branch at Franklin Ave, just off Fulton Street, or the Crown Heights library (St Marks and Nostrand).

Prospect Heights bars such as Sepia tend to be open but relatively deserted during the day. At Soda Bar during the day, ask the bartender (nicely) to turn down the music, and they usually will.

Coffee shops are usually favored by laptop campers, but in Prospect Heights, you should probably avoid Joyce, Sit and Wonder, Milk, and all the other coffee places: they tend crowded and noisy, with no outlets, lots of babies, and reportedly, customers who won’t share a table. The Glass Shop in Crown Heights is hip, but baristas play music loud enough to eradicate productivity from the most disciplined brain.

Dean Street at Dean and Underhill opens as early as 8 am. Scones, muffins, coffee, nice atmosphere and pleasant staff. I don’t remember that there’s any music.

And if you don’t mind a bit of a trip, check out Study Hall at Proteus Gowanus, a “place for quiet contemplation, study, and work” open every weekday (Monday through Friday) from 10 a.m. to 6 p.m. If quiet work space with WiFi was not enough, they also have fresh coffee, occasional snacks, and small cubbies you can use for supplies and notebooks. They want $50 for a month’s membership, but think of all the “guilt purchases” you’ll avoid by not working at a coffee shop or bar, where you could easily spend $20 per work session to keep the barista/bartender from shooting you surly looks.

Colala on Washington: Reviews are Rolling In

Colala, the new Asian (Japanese and Chinese) restaurant at 791 Washington Ave., has finally made it to Yelp,  and the reviews are a bit equivocal at this point.

While it’s got a great location close to museum, and is pretty affordable thanks to its (for now) BYOB status and close proximity to  liquor store, there have been some order mix-ups, and the food has been characterized by some as “average” and “bland,” and there are extra demerits for playing the pan-Asian card; i.e. trying to cover more than one Asian cuisine, rather than specializing. “I’ll keep this place on reserve for those nights when I am making dinner plans with an indecisive or conflicted group torn between Japanese or Chinese food,” writes Nyota W.

On Brooklynian, however, the 4 of 4 reviews posted so far are positive and suggest this is going to be a great neighborhood option if you set your expectations accordingly:

“(We) had the Szechuan Beef combination, and … Mu Shu Vegetable. We felt the food was good. Bill was $21, before tip.”

“I agree the food is “good” … the food was ready and waiting for me at the register no later than 20 minutes after It was placed. What, no fortune cookies? No Crispy Noodles?”

“Had their cold noodle last night- it was really good, not nearly enough sauce though.”

“I shared their vegetable lo mein and the general tso’s tofu lunch specials yesterday with my gf. Pretty good! Would definitely try again.”

According to the Trulia listing of 181 Park Place, this multi-family, 4,137 sq ft property was built in 1931. It’s not on the market, but the average price for homes sold recently is almost $1.6 million, or well over the average list price of $620k for Prospect Heights.

Prospect Heights Apartment of the Day: 1.5 BR with Private Terrace and Manhattan View 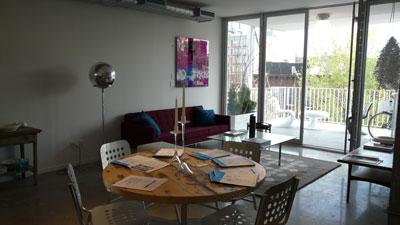 For $2800, this new-construction loft space in a community of 6 buildings has a master bedroom with two closets, and another half room with a closet of its own (though the room is likely too small for a share, it would make a nice office or child’s room); both have floor-to-ceiling windows and balcony access.

How to Make Your Own Parking Spot

Here’s how to make your own parking spot in 60 seconds or less – by ripping out a “No Standing” sign, like this Atlantic Yards worker did, and got caught red handed and was youtubed:

This showed up on theAtlantic Yards Report, which reported that there’s a “No Standing” sign on the south side of Pacific Street (between Sixth and Carlton Avenues) that construction workers uprooted in a quest for free parking, and it was not the first time: one sign was pulled out in mid-December, and just a week later, its replacement was again pulled out.

The deed caught on video occurred at about 6:15 am on Friday, as a construction worker parked next to the sign. If you fast-forward to about 1:10, you can see him rocking the sign with his hands until it’s dislodged. At 3:16, he moves the sign to the north side of Pacific Street, near the MTA’s Vanderbilt Yard.

Free parking? According to Atlantic Yards Report, this may be the responsibility of Empire State Development, the state agency overseeing Atlantic Yards construction, and “has the power to crack down on developer Forest City Ratner, its subcontractors, and ultimately their employees.”

The level of jerkdom here is high, but perhaps not uncommon: “I think a number of people are jerks to this degree, they just lack the upper body strength to actually follow through,” tateinbk writes on Brooklynian (read more discussion).

This “Prime” Crown Heights property, a little one-story shell across from Franklin Park, is for sale. They are asking $339,000 and soliciting cash offers. It seems like a very good price for the land alone.

“If the seller was properly motivated, and a little patient in terms of time to close (which they might be if they get no cash offers fast), a 203(k) loan on the property would turn up a very nice single-family home for the price of a condo,” the other day. An FHA-backed 203(k) loan, which would pays the seller and gives you cash for renovations, can be had by anybody who can pony up a 3.5% down payment. As long as you use the existing ~1000-square-foot foundation to erect a three- or four-story building, it could work.

If the plot is zoned R-6B, which it seems to be, somebody could erect a 4-story building (max buildable: 5200 square feet), one condo per floor, and if it’s short enough, no elevator would be required under the building code. Such a plan could be realistic – judging from a few small “infill” buildings recently built in the neighborhood.

With 5200 square feet to use, four stories would clock in at 1300 per floor, with a nice roof deck and back yard to boot. By going condo, you could get money back quickly even at $570,000 per floor. So why is this still on the market? One issue could be that no one is giving out construction loans right now (hence the cash-only situation, and the interest in 203k loans). Despite the proliferation of businesses in Prospect Heights over the past few years, there are still very few 24-hour restaurants in the area. Even the venerable Antonio’s Pizza stops pickup/delivery by 10:30 pm. One of the closest options is Daisy’s Diner in Park Slope, which doesn’t deliver to Prospect Heights, and has been compared to an lost island of the damned, if you’re into that sort of experience.

There are a few issues at play here: first, there’s probably insufficient demand for Prospect Heights late night and early morning dining, and for a long time, it was too dicey in the neighborhood for delivery guys out during the wee hours, locals say.

For now, you may have to settle for a short list of late-night options, and plan your schedule accordingly. One of the closest things to 24/7 dining you’ll get is Key Food on Flatbush, which indeed, is open all night. Beyond that, some late night options include Woodwork which serves food until 1 or 2, and Plan B, which actually delivers until 3:30 am. And don’t forget the White Castle on Atlantic is 24/7, if you consider that to be a food option.

If all else fails, try checking Delivery.com or Seamless Web for novel options (some outfits in Queens or Manhattan will deliver to Prospect Heights … for a price (and a large minimum delivery amount).