Posted on June 16, 2005 by dailyheights
2 Comments Leave a comment 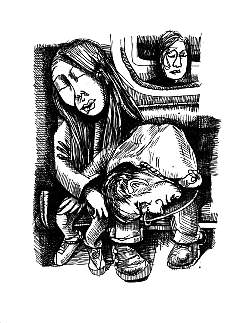 Prospect Heights artist Bill Batson writes: “I use the word ‘noir’ to express the drama and mystery that comes with spending so much of our time in public spaces sitting next to total strangers … on hard surfaces, often staring blankly ahead, framed by advertising, years of our life are spent in this anonymous travel mode … as the world becomes more digital, people on opposite sides of the globe have more contact with each other than we do with our seat neighbors. What will it take to eliminate barrier of alienation that is the line between random strangers and a community?” [Read more after the break…]

“I have been drawing on the subway since I attended an art class at Pratt in 1979 … Recently, I have been reviewing the thousands of portraits I have collected, looking for faces that reflect the most mood and mystery.”

“… For the millions who use the subways, commuting is a daily shared experience … it may seem like a hostile scrum of impatient caffeine junkies clawing through underground caverns. To the educated eye, you observe blurring figures respecting each other’s boundaries and reacting to changes in direction with the grace and agility of migrating wildebeests.”

“We need to focus more attention on the quality of our commutes … In Brooklyn, over 60 million square feet of new development is being constructed. And in response to this growth, the MTA raises fares and reduces services … We are in a culture where everyone has to have the fanciest car, but our public spaces go neglected.”

“We care so much about the mating habits of celebrities, but ignore each others’ basic human needs. … If we treated our neighbors to half the fascination we afford mediocre entertainers, our city and our future would be brighter. Until then, we settle into a world of shadows, awkwardly inhabiting the same underground assembly line … packed together yet all alone.”

Bill Batson is a Brooklyn-based artist writer and activist. As a political activist, Batson has organized some of New York City’s largest demonstrations against police brutality and managed Norman Siegel’s 2001 campaign for Public Advocate. Currently, Batson is the Director of Community Relations for the Democratic Leader of the New York State Senate, David A. Paterson. He is also a co-founder of the American Civil Rights Education Service (ACRES) a Comissioner on the Citizen’s Commision on Africa and a member of Community Planning Board 8 in Prospect Heights, Brooklyn, chairing a special sub-committee on the Brooklyn AtlanticYards Environmental Impact Statement.